Fill in the blanks.
(a) The layer of ozone gas absorbs ………… rays that come from the sun to the earth.
(b) Of the total water available on the earth, fresh water forms …… percent.
(c) Both ……. and ……… constituents are present in the soil.

(a) The layer of ozone gas absorbs UV rays that come from the sun to the earth.
(b) Of the total water available on the earth, fresh water forms 0.3 percent.
(c) Both biotic and abiotic constituents are present in the soil.

Why is it said that – ?
(a) The ozone layer is a protective shell of the earth.
(b) Water is life.
(c) Seawater is useful even though it is not potable.

a. The ozone layer acts as a protective layer for life on the earth because it absorbs harmful ultraviolet radiations of the sun. These radiations, if reach the Earth’s surface, can cause skin cancer.

b. Water is one of the most precious resource which we have on earth. All the biochemical processes which occur in plants and animals, our surroundings etc. require water to function. It is required for the existence of life on earth as it is an essential component of all the biological processes. We cannot imagine our lives without the presence of water.

c. Although sea water is not potable, it has various other kinds of uses which prove its importance:

What will happen if –
(a) Microbes in the soil get destroyed.
(b) The number of vehicles and factories in your surroundings increases.
(c) The total supply of potable water is finished.

a. Soil contains various kinds of microbes like bacteria, fungi, algae, protozoa etc. All of these microorganisms play an important roles like:

The above points explain the fact that how important microbes are and if they are destroyed its effect can be irreversible.

c. If the total supply of potable water is finished then the life on earth will end. Water is required for the existence of living beings and in its absence, it owuld hamper their developemnt process and their survival.

Name the following.
(a) Constituents of the biosphere
(b) Biotic constituents of soil
(c) Fossil fuel
(d) Inert gases in air
(e) Gases that are harmful to the ozone layer

True or false?
(a) Land and soil are the same thing.
(b) The water in a lake is called ground water.
(c) It takes about 1000 years to form a 25 cm thick layer of soil.
(d) Radon is used in decorative lights.

(a) Land and soil are the same thing.- False
(b) The water in a lake is called ground water.- Flase
(c) It takes about 1000 years to form a 25 cm thick layer of soil.-False
(d) Radon is used in decorative lights.- False

Answer in your own words.
(a) Explain with the help of a diagram how soil is formed.
(b) Why is there a shortage of water even though it occupies about 71% of the earth’s surface?
(c) What are the various constituents of air? Write their uses.
(d) Why are air, water and land considered to be valuable natural resources?

a. Soil is formed by the process of weathering during which rocks break down to form soil particles. This breaking down of rock occurs over a period of millions of years. Weathering can be physical, chemical, and biological. The bedrock breaks down into pieces due to the effects of heat, cold, water, wind and rain. Microbes, insects and rodents also help iin this process. The roots of trees also help in the process of weathering. 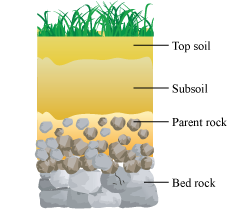 b. Although water occupies about 71% of the earth’s surface, all of it is not potable water. Most of the water is available in the form of seas and oceans which is salty in nature. This saline water has its limitations and cannot be used for many purposes. Around 2.7% of water exists in frozen state or as groundwater which is unaccessible. Only 0.3% of water is available as potable water which is fit for human consumption.

d. The following points elucidate the fact that air, land and water are valuable natural resources: